The future in a bottle

Lars Hildén from BillerudKorsnäs at work in the factory in Slangerup. Foto: Johanna Wallin

The paper pulp must be held by hand with a drill before a new bottle can be made as demonstrated by Shawakh Ali Almahli. Foto: Johanna Wallin

A test bottle has just been tested and blasted into small pieces. The bottle has a water resistant layer on the inside and is made completely of biodegradable material. Foto: Johanna Wallin 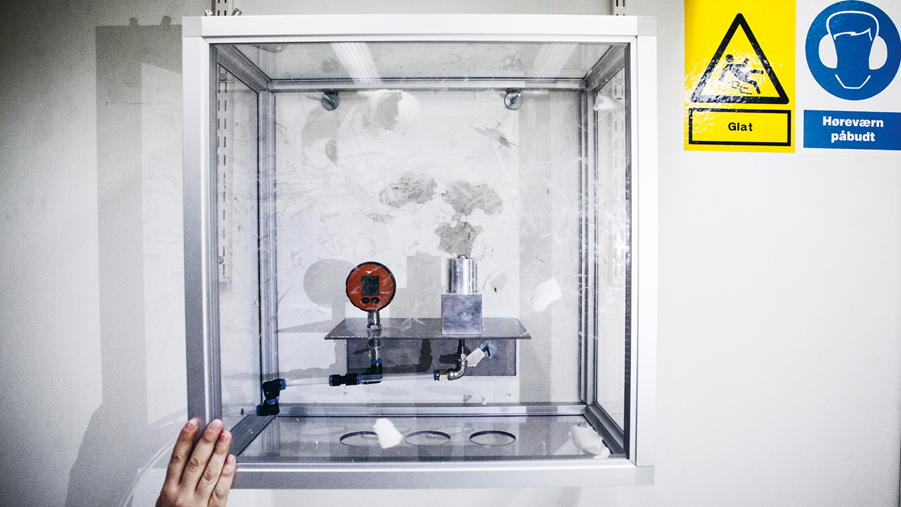 When EcoXpac's CEO Martin Petersen heard about the project for the first time, he thought it was madness. Now it's reality. Foto: Johanna Wallin 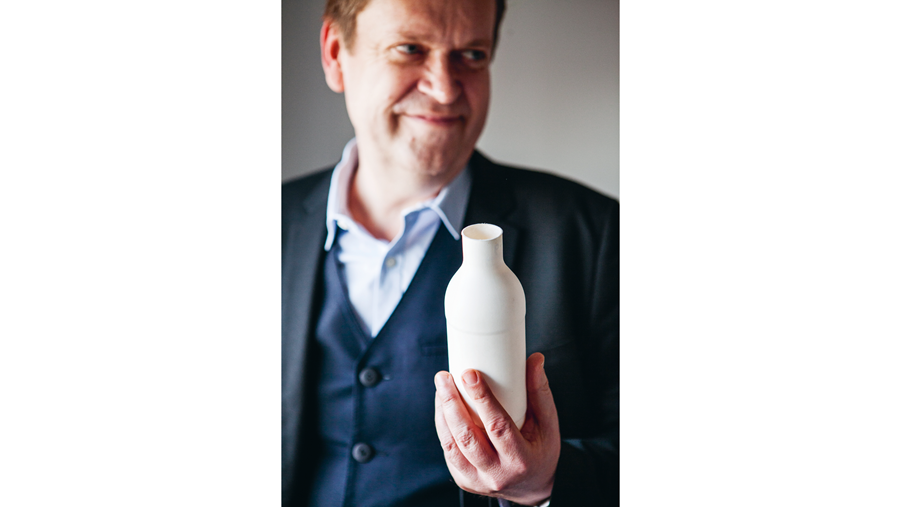 The material is insulating regardless of the temperature of the contents and it is easy to hold in one hand. Foto: Johanna Wallin 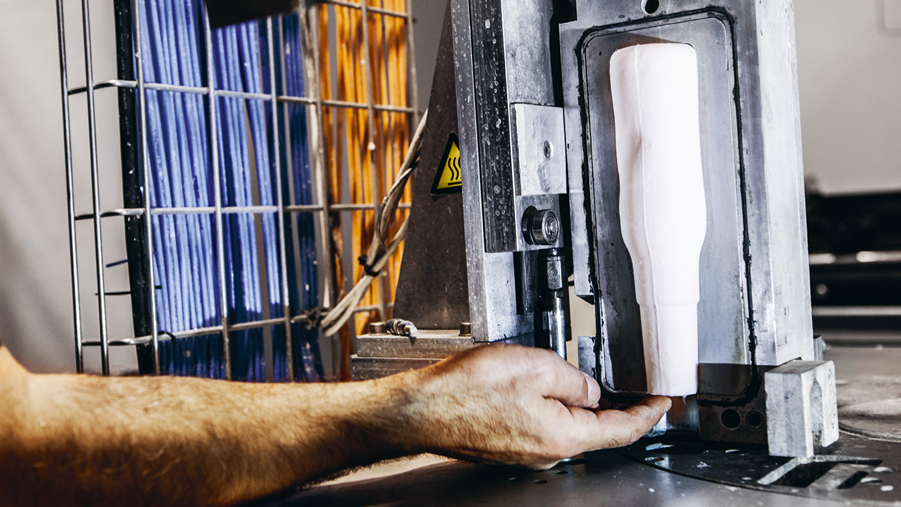 The various prototypes are made from recycled pulp. Here is the prototype of the football-shaped cork that Martin Petersen hopes will become the official bottle at the Tokyo 2020 Olympics. Foto: Johanna Wallin

Imagine if a biodegradable bottle could replace all the glass and plastic bottles that litter our environment. Well, this could be a reality. The world's first fiber-based bottle for carbonated beverages, Paper Bottle, is currently being developed using Swedish wood in the Danish town of Slangerup.

"When I close the hatch, an alarm will ring so that everyone will know what's going to happen – right after that, I'll blow the bottle. Do you have your hearing protection on?" The technician closes the cover of the small plexiglass box where he put the white paper bottle. The alarm sounds through walls and ceilings to the office above and to the production rooms next to it, before it reaches a pitch so high that everyone jumps.

We are at ecoXpac in a small industrial area outside the Danish town of Slangerup, about half an hour drive from Copenhagen. This is where the so-called Paper Bottle, which has been the center of serious hype in the packaging industry in recent years, is made. The bottle is cast in 3D with fiber from new wood and by the time it reaches consumers, it will be the first of its kind that can withstand carbonated drinks. The fact that the Paper Bottle – unlike the aluminum cans, plastic, and glass bottles dominating the market today – is biodegradable and has lower climate impact in manufacturing, has made expectations high.

In addition to the ecoXpac lab, where the pressure sustainability of the bottle has just been tested, the entire production chain is assembled in the company's three buildings in Slangerup: from the digital drawing boards to the smithy that made the machines. There are engineers, researchers, technicians, casters and administrative staff.

"That is what makes our environment unique," says ecoXpac's CEO Martin Petersen. "Having everything here means that we get a completely different overview of the process. If something needs to be changed, we can arrange it directly without long detours through administration and formalities. It is a very creative environment because everyone works together in the same place."

Martin works alongside Irina Rauvanto, the Technical Director of Formable Solutions at Swedish-owned BillerudKorsnäs. A year ago, the company invested in a minority of ecoXpac's shares and since then, they have been developing the new bottle. Irina Rauvanto and her colleagues from BillerudKorsnäs R & D department add years of knowledge of pulp packaging and large scale production to ecoXpacs innovative team. This mix of innovation and experience is essential when working on the world's first molded paper bottle for carbonated drinks.

"A very important part of the development is the sustainability aspect. It is one of our core values and as such, it's important that every stage of the process has as little environmental impact as possible," says Irina Rauvanto.

BillerudKorsnäs has long been committed to sustainability issues, not least through the newly established subsidiary BillerudKorsnäs Venture. Their task is to find and invest in new sustainable solutions in the packaging industry so that in the future, plastic doesn't account for as much of the market as it does today.

By 2025 there will be one ton of plastic for every three tonnes of fish in the ocean. By 2050, it is estimated that there will be more plastic than fish. "We need to find new solutions if we are going to reverse that trend", says Anders Persson, CEO of BillerudKorsnäs Venture.

At ecoXpac, they found exactly that – an exciting and sustainable solution for bottles. While non-recycled glass and plastic bottles can remain in nature forever, the Paper Bottle is biodegradable. "We were interested in making bottles of paper fiber and then we found ecoXpac. They have the technology to produce fiber-based packages that can actually hold carbon dioxide," continues Anders Persson.

EcoXpac was early with the idea of ​​a biodegradable bottle having started working with innovative paper packaging in the late '00s. EcoXpac's CEO Martin Petersen knew founder Jesper Servé from university and was attracted to the company and its innovation. But, at first, he did not think of the idea of ​​a carbon-filled paper bottle. "At my very first meeting with the board I told them that Jesper was crazy! It was the craziest project, far too visionary and with far too many obstacles to overcome. But I quickly became convinced."

The Danish Technological Institute and the Technical University of Denmark, both of whom have been involved in the project, are convinced. But the real breakthrough came in 2015 when Carlsberg invested heavily in the Paper Bottle. At the World Economic Forum in Davos, they presented the idea to ​​the world and it quickly received great attention and dissemination. Soon after, BillerudKorsnäs jumped on board.

"Those two events were key for us. Now we have two very strong partners. Carlsberg, who have the platform to tell the world about the product and BillerudKorsnäs who can produce and bind it all together," says Martin Petersen. The interest in Paper Bottle from business is high. But what will consumers say? What is it really like to drink from a paper bottle? The answer is that it feels like drinking from any bottle. When held, the bottle feels like a fifty-centiliter plastic bottle but it is harder when squeezed. From a consumer perspective, it could easily replace plastic bottles.

Neither Martin Petersen nor Irina Rauvanto want to single out the plastic bottle as the main competitor, though. They see great potential for fiber bottles in the future and hope that this technology will open up completely new packaging opportunities. "It is very interesting to see what other products the same technology could be used for now that we have a carbon-resistant bottle. Cosmetics, cleaners...really anything you use and then throw away," says Irina Rauvanto. A concrete example of new possibilities is also molded packages, such as egg cartons, which were previously made of recycled paper and therefore only approved for natural-scale foods – such as eggs. Irina Rauvanto sees using pulp from trees in northern Sweden rather than recycled material as being the most revolutionary aspect of the Paper Bottle. "This has the potential to open completely new doors for us – it can be organic and it can be used for food products that could not previously be packaged in paper."

The bottle is not yet officially approved for food use but as soon as the inner surface layer is fully developed approval doesn't seem to be far behind. There are, however, more obstacles before the bottle is ready for the shelves. Not least manufacturing costs that need to be pushed and a business model for large-scale production. EcoXpac's premises will not be enough for commercial production of Paper Bottle, so new and larger factories will also be required.

For Martin Petersen and Irina Rauvanto these seem like doable challenges. Martin explains that they have received support from the Danish Innovation Fund to produce between 10 and 20,000 bottles for a larger test panel by mid 2018. Following that, the dream is to make a full-scale launch in conjunction with the Summer Olympics in Tokyo 2020.

"I met with the Danish Environment and Food minister and gave him a specially designed bottle with a football shaped cork. He loved it and I know he will now pass it on to the Japanese ambassador. If all goes well, Paper Bottle can be the official bottle at the Tokyo 2020 Olympics," says Martin Petersen.

The Paper Bottle – If we can dream it, we can make it

EcoXpac was founded in 2005 by engineer Jesper Servé. Initially, they invested in innovative packaging for IT but in 2009 the seeds for was what is today Paper Bottle, were sewn. The company has about 40 employees in its three premises on the outskirts of Slangerup, Denmark.

BillerudKorsnäs Venture was founded in the summer of 2016 as a subsidiary of BillerudKorsnäs. The idea of the company is to enable faster implementation of new innovation projects and collaborations for sustainable packaging solutions.