Joanna Dupont-Inglis: fighting for the EU bioeconomy in Brussels 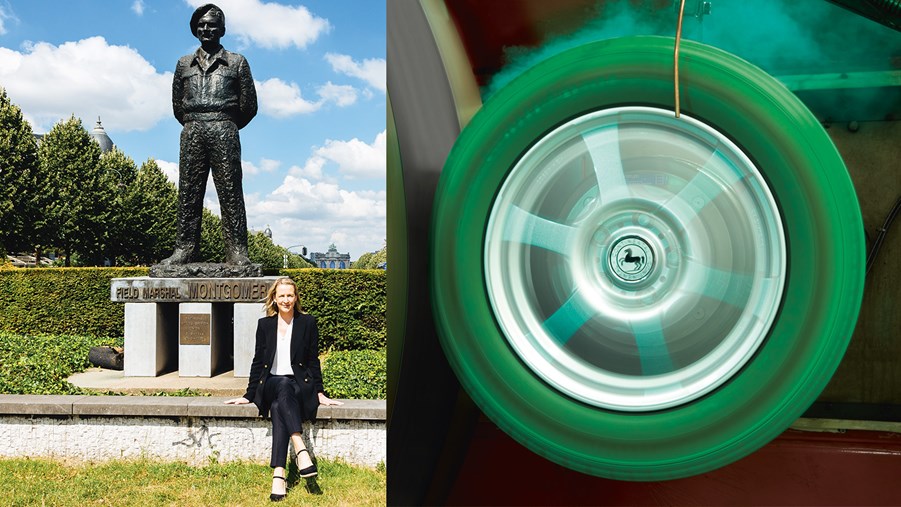 Joanna in front of one of Brussels' most famous landmarks, the statue of field marshal Montgomery. In the background, there's a glimpse of the Cinquentinaire monument. She sees both of these Brussels icons from her office window.

"Biotech is about learning from nature and living systems, and finding ways to develop new products and processes that provide more benefits or solutions to society," says Joanna Dupont-Inglis. A fantastic example are the car tyres made from dandelion rubber from Continental.

Her childhood fascination with making things from nature has developed into a passion for pushing for the potential of the EU bioeconomy. Joanna Dupont-Inglis is the secretary general of Europabio, the Brussels-based association for bioindustries whose innovations are a prerequisite for the future bioeconomy.

As a child, Joanna Dupont-Inglis spent most of her down time either trying to grow things, or make things out of things she had grown. She would make paint, drinks, perfume all out of elements she had found in nature. "Despite this I was moderately popular!" she recalls.

Today Joanna Dupont-Inglis is secretary general of Europabio, the Brussels-based European association for bioindustries. That childhood fascination with making things from nature has blossomed into a passion for promoting the potential of the bioeconomy in the European Union. It is a fight that motivates her, she says, because the potential for biotech to improve the quality of life of a growing population, whilst using resources more efficiently, in the EU is huge – even if many policymakers don't know it yet. It may seem like a natural journey, but in fact, Joanna says she ended up in EU policy quite by accident.

"It was actually by chance that I ended up in Brussels after I graduated university – just because I had a friend who was working for the UK permanent representation to the EU out here," she says. "I came to visit her in 2000, and I bumped into another old friend who was looking for a person with an environmental background to work at a consultancy." And with that, Joanna's Brussels career was born. But it was a steep learning curve. Growing up in North London, Joanna had received little in the way of education about how the EU legislative process works, although she had graduated in environmental science and European studies at Sussex University in Brighton.

"Before I came, I had only superficially studied European policy-making, and I think I saw it as a force for good," she recalls. "I could appreciate that the environment is not something that's confined to or protected by national borders. It's all about fluidity and change. Air and sea and water are not national issues. So it made a lot of sense to me that there was a European endeavor to try to improve the quality of the environment across Europe. But I had no idea how it was done, and I had only the vaguest understanding of how the institutions worked. So it was quite a revelation, and it took a few years to fully wrap my head around it."

Joanna Dupont-Inglis started out at a large Brussels consultancy, where she worked on responsible care of chemicals, counting the European chemicals industry association CEFIC among the client accounts she was managing. She then worked for two years in the European Commission's environment directorate, helping to administer the LIFE Programme financial instrument. She then moved to the think-tank The Centre.

"That was great because I got to do quite a lot of work with NGOs and international organizations, looking at finding solutions to what have since become known as the 'sustainable development goals'," she says.

"It was things like delivering healthcare to developing nations, tackling poverty and innovating towards sustainability. That was nice because it gave me the opportunity to work with a really broad and diverse group of people from varied backgrounds and perspectives."

Europabio was a client of The Center, and after advising them she joined the team in 2009, supporting the agricultural biotech team and moving from there to horizontal communications for the association.

It hasn't always been an easy job. Biotechnology can be an emotive subject for the public, which can result in confusion and fear among lawmakers. This is especially true in the areas of agriculture and food.

"When I first started learning about biotech, I was surprised by how emotive the topic was for a lot of people," she says. "For me, it made perfect sense right from the beginning that if you could develop new varieties of crops, if you could use the power of nature and biotech to develop products and processes that are more sustainable, within the framework of one of the most rigorous regulatory systems in the world, then why not do it?"

"[As a society] we've always been willing to adopt certain practices and products if we can see the benefits in them, without thinking about whether there's any risk involved in using them – but this doesn't seem to apply to biotech," she observes. "Ten years ago either none of us or far fewer of us were using smart phones, Twitter, amazon, google, uber, hoverboards, airb&b or Facebook, but we were all willing to adopt them and embrace them enthusiastically. But with something like biotech people are much more hesitant."

Biotechnology can mean different things to different people. The term "bioeconomy" has been defined by 40 countries around the world which have developed national bioeconomy strategies. But there is still no universally agreed definition. In North America, bioeconomy means the business world's commercialisation of biotechnological processes. In Europe, on the other hand, the focus is on biomass - the raw materials.

Joanna has dedicated much of her time towards highlighting the opportunities and challenges of working with biotech. But how would she define biotechnology to a random person on the street who isn't seeped in the world of policy-making?

"Biotech is about learning from nature and living systems, and finding ways to develop new products and processes that provides more benefit or solutions for society," she says.
The European bioeconomy is already worth €2 trillion annually - primarily in agriculture, forestry and fishery, creating jobs for over 22 million Europeans. But Joanna says it has the potential to do so much more. 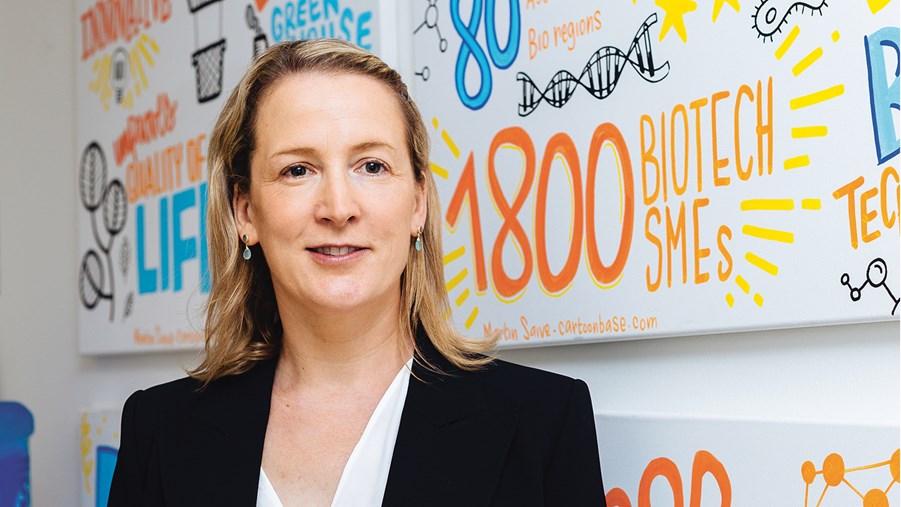 "Anything you can make from oil you can also make from wood. Most people don't know this but when it's explained to them, and they can touch and feel products made from wood, instead of from fossil carbon, there is great enthusiasm for these renewable alternatives."

Over her years working in the business, she has noticed some changes in attitudes toward sustainability and circularity when it comes to the bioeconomy, both from policymakers and the public. She says that the level of knowledge among EU policymakers in Brussels varies significantly, but there are many lawmakers who understand the potential.

"We're lucky to have, both in the commission and the parliament, and the council as well, people who have a great degree of understanding and appreciation for innovation science and technology," she says. "So there's definitely a good basis for discussion and policy development."

"Then there's a middle ground of people who are open and receptive to the idea of using technology to innovate solutions, but don't know that much about biotech and aren't that interested in it, or don't find it particularly accessible," she says. "They're probably open to learning more but simply don't have the time to learn about this complex technology."

"Then there's another group that are very much opposed and entrenched in their distrust of the technology," she adds. "The opposition is more about GMOs [genetically modified organisms] than medicines or other products and processes."

"From my perspective, and the work that the EU does on the bioeconomy, it's very driven by pragmatism, but tempered with a real valid and legitimate concern about the use of resources and pressures on biodiversity," she concludes. "From the bioeconomy side it's pretty pragmatic, because people do see a lot of potential for using things that we used to see as waste previously to provide for a growing population."

Still there are obstacles to harnessing the benefits of biotechnology, and these include public resistance. "I think if I talked to my colleagues that work in agricultural biotech they would say that they don't yet enjoy such a broad potential for discussion in the EU as easily as I do," she says.

"That said, more and more people worldwide are open to planting GM crops worldwide and to discussing the potential for benefits. I think for the healthcare side of things there is a great willingness to be open to how the technology will help us develop new therapies to tackle some of the most devastating diseases that we have. But there is also great investment required to deliver new therapies and treatments".

That lack of investment and an appropriate policy infrastructure is a major obstacle to meeting the full potential of biotech in all sectors.

In terms of the bioeconomy, Joanna Dupont-Inglis says forestry it is an important player for a growing bioeconomy.

"The Forestry sector has great potential as a crucial pillar within the bioeconomy to help tackle climate change, deliver on UN SDGs and bring value, health benefits, jobs and growth to rural areas and populations," she says. "Anything you can make from oil you can also make from wood. Most people don't know this but when it's explained to them, and they can touch and feel products made from wood, instead of from fossil carbon, there is great enthusiasm for these renewable alternatives."

Despite the obstacles, the future of biotechnology is looking bright. Joanna is working on several interesting projects coming down the pipeline.

"At Europabio we're doing quite a lot of work on illustrating the links between industrial biotech and sustainable development goals," she says. "Our European Forum on Industrial Biotechnology and the Bioeconomy in Toulouse in October is focusing on that. We're also hoping for an ambitious and progressive Horizon Europe proposal to build on the great work achieved through the Bio-based Industries Joint Undertaking and are hoping for a second mandate for this groundbreaking initiative."

With all of this in mind, Joanna has some predictions about what biomaterial will replace finite materials in the short term, and what will be more realistic to expect in the long term.

"These include car tires made from dandelion rubber, cosmetics from plants, fibres from orange peel waste, high value chemicals from hazelnut shells, food supplements from algae and plastic packaging for cheese out of milk waste," she says. "In the longer term, as we accept the need to divest subsidies from the fossil based industries and to increasingly substitute biomass in developing new renewable materials we will see many more new and novel applications coming online and into our lives."

The area of biotechnology remains an exciting one to work on in Brussels. The challenges may be myriad, but the potential rewards for the economy, people and planet are an intense motivating factor.

Bioeconomy - in your everyday life

Here we want to show you what amazing opportunities there are to make a difference by using renewable resources and investing in a growing circular bioeconomy – a prosperous economy built on fossil-free materials.