The forest has always been important for mankind

From the Stone Age to the present day – the forest has always been important for mankind. In this timeline, historian Gunnar Wetterberg tells how people have used the forest in Sweden, and how today’s sustainable forestry has been shaped.

The arrival of agriculture changes people’s relationship with the forest. Trees are used to serve agriculture: cattle graze in the forest, people scratch winter feed from the trees. The forest is a source of fuel, fencing and timber for houses.

Forest covers most of Sweden. People hunt game, catch fish and gather roots, nuts and berries in the forest.

Industrialisation in Western Europe leads to rocketing demand for sawn timber. The sawmills in Swedish watercourses started delivering timber for export back in the 18th century, but after the Napoleonic Wars things really take off. Competition with the ironworks lead to systematic forestry being introduced in the Bergslagen region in the early 19th century, and Northern Swedish forests also start being used.

Because of deforestation in Europe, Swedish metalworking becomes the nation’s most important export industry, thanks to the access to fuel. After the forest close to mills starts running out, in 1647 Axel Oxenstierna writes forest regulations to use trees more sustainably. Mills are set up along the Northern Swedish coast. It is easier to bring the ore there than take the timber to the mines.

In the mid-1800s, steam saws represent a vital technical breakthrough. Sawmills can now be located on the coast, where the planks are reloaded onto export ships. The sawmills expand quickly and attract workers from across Sweden. The trees are felled and delimbed using axes, the logs are transported by horse and sled to the nearest watercourse, and then floated on the rivers to the sawmills.

Pulp made from wood raw material becomes the next important technical breakthrough for the Swedish forest industry. Meanwhile, saws are replacing axes for felling as they produce less waste. Exports increase in importance after Swedish cities’ building laws limit the use of wood in housebuilding from the 1870s.

WWII again blocks Sweden off from much of its foreign trade, so the domestic market comes more into focus. The forest is in demand for vehicle fuel and animal feed. Forest owner associations mobilise members to clear and thin the required timber. This benefits forest growth for decades to come. The associations make money, which is invested in sawmills and pulp mills after the war.

Felling is so intense in places that a Forestry Act is introduced in 1903. It states that anyone harvesting trees must plant new ones. 1923 sees the first Swedish National Forest Inventory, which continues still today to gauge the status, growth and felling in Sweden’s forests. Meanwhile, more and more of the raw material is being used. From the residues of papermaking, alcohol is made for engine fuel and aquavit. With Alfred Nobel as an interested pioneer, artificial silk starts being made from cellulose. Glulam is used for beams under heavy loads, but wood soon has competition from concrete. Due to the tough economy of the 1920s and ’30s, forestry is not very profitable. Most owners prefer to fell individual trees and trust natural regeneration for regrowth. Forest owner associations are started up to spread knowledge of forestry to forest farmers, who still let their animals into the woods, resulting in grazing-damage.

Forestry is mechanised with chainsaws and debarkers. But wood now has competition from cheap oil, both for heating and from plastics and other new materials. The forest industry therefore focuses on sawmills and papermaking, which expand rapidly. This leads to a concern that the raw material will run out. Private forest owners in Southern Sweden are not deemed to manage their forests well enough, so some advocate socialisation of the forest. But the forest owner associations help their members to manage the forests more rationally. The state uses the Forestry Act and the conservation organisations to micro-regulate how owners should use their land, and which large forestry industries are allowed to start up.

From the 1960s, increasingly large machines come into use: harvesters, loaders, forwarders, originally often converted tractors but gradually more and more specialised. This leads to the emergence of a Swedish forest machine industry, with a market at home and exports abroad. The 1973 oil crisis slows the competition from fossil fuels. Micro-regulation from the state continues but meets increasing resistance, both from users and the environmental movement, who question certain methods, including pesticide spraying and large clear-cut areas.

The criticism leads to a new direction as the 1993 Forestry Act is adopted. Production and the environment become equal objectives, and forest owners now have great freedom to manage the forests as they wish, as long as it’s sustainable. FSC certification comes along in 1999 and has a major impact on forestry. In 1994 the National Board of Housing, Building and Planning changes the rules, swapping 19th century height limits for wooden houses for functional requirements. This opens up new opportunities for wooden buildings. Paper is used in new packagings and the industry starts making diesel from tall oil.

The climate crisis puts forestry and the forestry industry back in the limelight. Partly due to the ability of growing forests to bind and sequester carbon dioxide, and partly due to a need for renewable, recyclable materials. 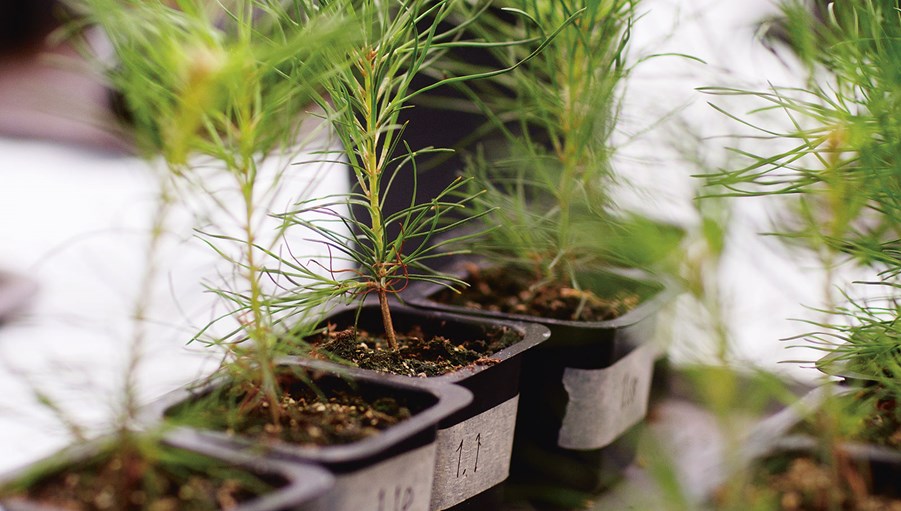